A man came up to Jesus, knelt down before him, and said,
“Lord, have pity on my son, who is a lunatic and suffers severely;
often he falls into fire, and often into water.
I brought him to your disciples, but they could not cure him.”
Jesus said in reply,
“O faithless and perverse generation, how long will I be with you?
How long will I endure you?
Bring the boy here to me.”
Jesus rebuked him and the demon came out of him,
and from that hour the boy was cured.
Then the disciples approached Jesus in private and said,
“Why could we not drive it out?”
He said to them, “Because of your little faith.
Amen, I say to you, if you have faith the size of a mustard seed,
you will say to this mountain,
‘Move from here to there,’ and it will move.
Nothing will be impossible for you.”
The Gospel of the Lord.

The Mass intention is for Eileen Dowling (80th Birthday).
Reflection:
Our faith teaches us that miracles are works of God either directly or through the intercession of His friends, the saints. The accounts of Jesus’ public ministry would not be complete without mentioning His miracles, one of which is featured in today’s Gospel.
St Dominic de Guzman, founder of the Order of Preachers (a.k.a. Dominicans), performed some miracles when he was still alive. A story goes that infant son of his hostess had fallen from a terrace and accidentally died. Moved with pity at the grieving parents, St Dominic “prostrated himself for a short space in prayer, shedding many tears; then, feeling his prayer heard, he rose and gave back the boy alive and well to his mother”. St Dominic counts among those whose faith according to Jesus “had the size of the mustard seed”.

• Jesus described the people as faithless and perverse. How open are you to His call to conversion?
• In this time of pandemic, how are you looking after your faith?
• St Dominic once said, “We must sow the seed, not hoard it”. When was the last time you sow the seed of faith in the hearts of those around you?

Lord, thank You for Your Word today. Through the example and prayers of St Dominic de Guzman, increase our faith that we too may bring Your healing to the world. Amen.
Fraternally,
Pietro 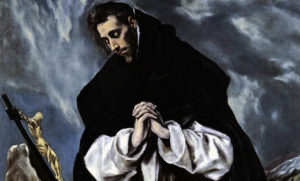