An argument arose among the disciples
about which of them was the greatest.
Jesus realized the intention of their hearts and took a child
and placed it by his side and said to them,
“Whoever receives this child in my name receives me,
and whoever receives me receives the one who sent me.
For the one who is least among all of you
is the one who is the greatest.” Then John said in reply,
“Master, we saw someone casting out demons in your name
and we tried to prevent him
because he does not follow in our company.”
Jesus said to him,
“Do not prevent him, for whoever is not against you is for you.”

The Mass intention is for Lorraine B’s intentions.

Like the child in today’s Gospel, Lorenzo Ruiz was a nobody in 17th century Philippines. Born of a Chinese father and Filipino mother, he served as sacristan and calligrapher at what is now the Minor Basilica of San Lorenzo Ruiz in Binondo, Manila. A member of the Confraternity of the Rosary, Lorenzo had a wife, 2 sons, and a daughter. He was accused of murdering a Spaniard. Being a native, he was not guaranteed a fair trial. He sought asylum with the Dominican priests serving in the church who took him to Japan where the priests would do missionary work. At that time, there was violent persecution in that country. Lorenzo and his companions were arrested and tortured. Some of them gave up their faith or were tempted to do so, but Lorenzo boldly declared to his tormentors: “Had I many thousand lives I would offer them all for him. Never shall I apostatize…To die for God – such is my will.”  Lorenzo, the “most improbable of saints” (St John Paul II), became a model witness of the Faith. Indeed, he personifies “the one who is least among all of you is the one who is the greatest.”

Lord Jesus, thank You for Your Word today. Through the prayers and example of St Lorenzo Ruiz and companions, grant us the grace to remain true to our Faith until You call us to praise You forever in heaven. Amen. 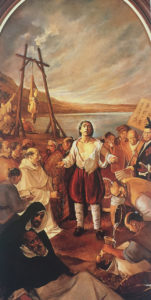