And he told them this parable:

“There once was a person who had a fig tree planted in his orchard,
and when he came in search of fruit on it but found none,
he said to the gardener,
‘For three years now I have come in search of fruit on this fig tree
but have found none.
So cut it down.
Why should it exhaust the soil?’
He said to him in reply,
‘Sir, leave it for this year also,
and I shall cultivate the ground around it and fertilize it;
it may bear fruit in the future.
If not you can cut it down.’”

The Mass intention is for Jackie Stanslaus RIP (9.30am Mass).

When Jesus began His public ministry, His first words were “Repent, for the kingdom of heaven is at hand” (Matthew 4:17). In today’s Gospel, He reiterated His call to repentance lest people suffer the same fate as the Galileans whose blood were mingled with the pagan sacrifice or the eighteen people who were killed when a tower fell on them. Jesus clarified that the victims of these tragedies were not more guilty than their contemporaries. I would imagine the Lord telling us the same if we are tempted to think that those who died in recent tragedies were more guilty than we are. We oftentimes think that tragedies are God’s way of punishing sinners. The parable of the fig tree dispels such view because it reveals Jesus as the merciful gardener.  Through His Cross and Resurrection, He cultivates us so that we can be fruitful.

St Anthony Mary Claret, whose feast day we celebrate today, was Archbishop of Santiago, Cuba. It was a much-neglected archdiocese when he arrived. In his first two years there, he confirmed 100,000 people and played a key role in bringing back 300,000 people to the Sacrament of Reconciliation.  He also established a credit union system to promote savings and help families have a livelihood. His legacy continues through the Congregation of the Sons of the Immaculate Heart of the Blessed Virgin Mary (Claretians) which he founded. God – through the Church – gives us the chance to shape up, to repent, to be fruitful. Let us not miss the chance He offers us.

Lord Jesus, thank You for Your Word today. Through the prayers and example of St Anthony Mary Claret, help us to turn away from our sins and be reconciled to You. For apart from You we cannot be fruitful. Amen. 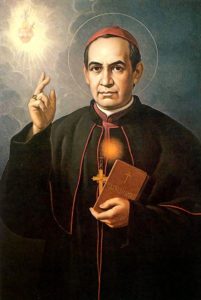