The Mass intention is for Thomas Martin RIP.

The late Cardinal Jaime Sin, former Archbishop of Manila, once commented that today’s parable should have been entitled “The Parable of the Prodigal Father”. Indeed, despite the younger son’s attitude – asking for his share of his father’s estate when the father was still alive and then dissipating his inheritance – the father still welcomed him. Notice the father’s attitude: “While he (the younger son) was still a long way off, his father caught sight of him, and was filled with compassion. He ran to his son, embraced him and kissed him.” Before that encounter, the son rehearsed what he was to say to his father: “Father, I have sinned against heaven and against you. I no longer deserve to be called your son; treat me as you would treat one of your hired workers.”’ But when he met his father, he was not able to say, “treat me as you would treat one of your hired workers.”’  Perhaps the father stopped him. Perhaps it was enough that his son admitted his mistake. This parable, for me, is one of the beautiful Gospels this Lent. It is full of hope for the worst sinner and for those who look down on sinners. Why? Because it gives us a clear picture of how prodigal a Father God is to everyone.

Lord Jesus, thank You for Your Word today. United with You, may we humbly return to the Father’s loving embrace this Lent. Amen.

Suggested Lenten penance: Pray for someone who has stopped practicing the faith. 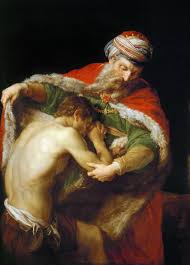