Gospel Thought for Today 18th November: Memorial of Dedication of the Basilicas of Saints Peter and Paul, Apostles

18th November: Memorial of Dedication of the Basilicas of Saints Peter and Paul, Apostles

After the crowd had eaten their fill,
Jesus made the disciples get into the boat
and precede him to the other side,
while he dismissed the crowds.
After doing so, he went up on the mountain by himself to pray.
When it was evening he was there alone.
Meanwhile the boat, already a few miles offshore,
was being tossed about by the waves, for the wind was against it.
During the fourth watch of the night,
he came toward them, walking on the sea.
When the disciples saw him walking on the sea they were terrified.
“It is a ghost,” they said, and they cried out in fear.
At once Jesus spoke to them, “Take courage, it is I; do not be afraid.”
Peter said to him in reply,
“Lord, if it is you, command me to come to you on the water.”
He said, “Come.”
Peter got out of the boat and began to walk on the water toward Jesus.
But when he saw how strong the wind was he became frightened;
and, beginning to sink, he cried out, “Lord, save me!”
Immediately Jesus stretched out his hand and caught him,
and said to him, “O you of little faith, why did you doubt?”
After they got into the boat, the wind died down.
Those who were in the boat did him homage, saying,
“Truly, you are the Son of God.”

Truly, you are the Son of God.

Visiting these two papal basilicas in Rome, one could easily differentiate a tourist from a pilgrim. As soon as a tourist enters, they would move from one part of the basilica to another, marveling the edifice and the works of art that has adorned it for centuries. A pilgrim, on the other hand, would first spend time to pray, to pay respects to the owner of the house, to acknowledge Jesus as the Son of God, as what the apostles did in today’s Gospel. As apostles, Peter and Paul were the Lord’s companions. Like us, they were not perfect. Today’s reading tells us how little faith Peter had. And yet, that companionship strengthened and prepared them to share in the Lord’s ministry. We are the new Peter and Paul in the Church and the world today! So, the next time we visit a church – be it a basilica elsewhere or a chapel at home – let us take time to be aware of and be touched by God’s presence there. Like the apostles, let us do our best to be in communion with the Lord through prayer and reading of Sacred Scripture. Fortified by His Word and Body and Blood, let us go out and spread His love to others.

Lord Jesus, thank You for Your Word today. Through the prayers and example of Saints Peter and Paul, draw us closer to You that we too may share Your Gospel to others. Amen. 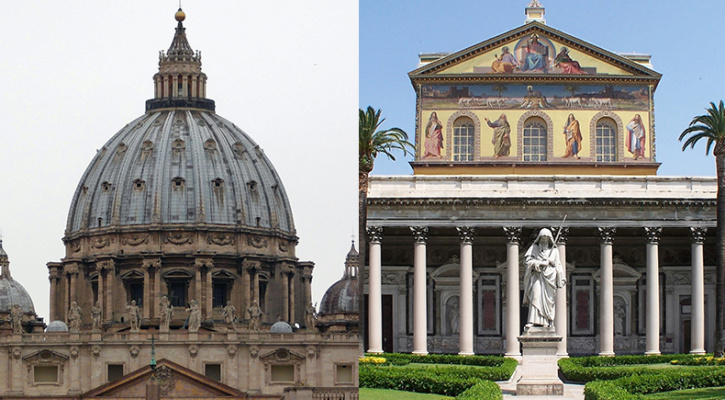