Sunday 28th June The Solemnity of Saints Peter and Paul

Now when Jesus came into the district of Caesarea Philippi, he asked his disciples, “Who do people say that the Son of Man is?” And they said, “Some say John the Baptist, but others Elijah, and still others Jeremiah or one of the prophets.”

He said to them, “But who do you say that I am?” Simon Peter answered, “You are the Messiah, the Son of the living God.” And Jesus answered him, “Blessed are you, Simon son of Jonah! For flesh and blood has not revealed this to you, but my Father in heaven. And I tell you, you are Peter, and on this rock I will build my church, and the gates of Hades will not prevail against it.

The Mass intention is for Fr Bill Sunders RIP

Today we remember Peter and Paul: two men called by God to do great things. Two men who certainly were not born equipped to serve the Lord, but rather, two men who were equipped by the Lord himself with the grace necessary to preach the Gospel and ultimately to give up their lives for its sake.

First came Peter: a young fisherman living on the coast of the Sea of Galilee in a marginal province of the mighty Roman Empire. A man prone to outbursts and weak under pressure.

When Jesus came into the district of Caesarea Philippi, he asked his disciples, “Who do people say that the Son of man is?” How firm is your faith in the Jesus? At an opportune time Jesus tested his disciples with a crucial question:

Jesus was widely recognized in Israel as a mighty man of God, even being compared with the greatest of the prophets, John the Baptist, Elijah, and Jeremiah. Peter, always quick to respond, exclaimed that Jesus was ‘the Christ, the Son of the living God’.

Through the gift of faith Peter recognized that Jesus was the “anointed one” (in Hebrew and Greek the word is translated as Messiah and Christ), and the only begotten Son of God sent by the Father in heaven to redeem a fallen human race. No mortal being could have revealed this to Peter; but only God. Jesus then conferred on Peter authority to govern the church that Jesus would build, a church that no powers could overcome. Jesus played on Peter’s name which is the same word for “rock” in both Aramaic and Greek.

Then came Paul: an intellectual, learned Pharisee who persecuted Christians, even ordering the stoning of the first martyr of the Church, Saint Stephen.

We have here two unlikely characters for the Lord to call into his service and to establish as apostles of the Church.  Yet the Lord chose them, and entrusted to them his Saving Gospel the Gospel of Love!

Though Peter recognized Jesus as the Messiah at Caesarea Philippi, he sank in the sea due to his lack of faith and later denied Jesus three times.

Paul, the exemplary persecutor of Christians was not even trying to follow Jesus.  He was dedicating all of his energy into squashing Christianity with a vengeance.

Yet these two men had an encounter with Jesus that changed them and their lives forever: “Peter, do you love me?” asked the Risen Jesus.  Then he ordered him to: “ Feed my lambs, tend my sheep, feed my sheep, Follow me.”  Peter must have fallen on his knees in tears, feeling unworthy to be in the presence of his friend after having denied him and abandoned him. Yet, Jesus could have said so many things: “Peter, why did you leave me?  Peter, What were you thinking?  Peter, I thought you were on my side, go away now and leave me alone.”  But Jesus showed great mercy and Peter’s heart was changed forever.

On his way to Damascus with letters granting him permission to arrest Christians, Paul heard a mighty voice: “Saul, Saul, why do you persecute me?…. this is Jesus, the one whom you are persecuting.”  This encounter with Jesus changed Paul’s life immediately. He began to preach despite the understandable suspicion of Christians.  They must have been saying, “the one who was killing us, now pretends to be one of us!  Watch out!”  Jesus showed great mercy and Paul’s heart was changed forever! 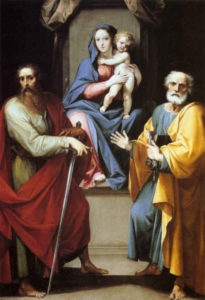