That same day, Jesus left the house and sat by the lakeside, but such large crowds gathered round Him that he got into a boat and sat there. The people all stood on the shore, and He told them many things in parables. He said, ‘Listen, a sower, went out to sow. As he sowed, some seeds fell on the edge of the path, and the birds came and ate them up. Others fell on patches of rock where they found little soil and sprang up at once, because there was no depth of earth; but as soon as the sun came up they were scorched and, not having any roots, they withered away. Others fell among thorns, and the thorns grew up and choked them.  Others fell on rich soil and produced their crop, some a hundredfold, some sixty, some thirty. Anyone who has ears should listen!’

Then the disciples went up to Him and asked, ‘Why do You talk to them in parables?’ In answer, He said, ‘Because to you is granted to understand the mysteries of the kingdom of Heaven, but to them it is not granted.  Anyone who has will be given more and will have more than enough; but anyone who has not will be deprived even of what he has. The reason I talk to them in parables is that they look without seeing and listen without hearing or understanding. So in their case what was spoken by the prophet Isaiah is being fulfilled: Listen and listen, but never understand! Look and look, but never perceive!  This people’s heart has grown hard, their ears dulled, they have shut their eyes tight to avoid using their eyes to see, their ears to hear, their heart to understand, changing their ways and being healed by Me. ‘But blessed are your eyes because they see, your ears because they hear!  In truth I tell you, many prophets and upright people longed to see what you see, and never saw it; to hear what you hear, and never heard it.’

So pay attention to the parable of the sower. When anyone hears the word of the kingdom without understanding, the Evil One comes and carries off what was sown in his heart: this is the seed sown on the edge of the path. The seed sown on patches of rock is someone who hears the word and welcomes it at once with joy.

But such a person has no root deep down and does not last; should some trial come, or some persecution on account of the word, at once he falls away. The seed sown in thorns is someone who hears the word, but the worry of the world and the lure of riches choke the word and so it produces nothing. And the seed sown in rich soil is someone who hears the word and understands it; this is the one who yields a harvest and produces now a hundredfold, now sixty, now thirty.’

The Mass intention is for Mgr Sosing RIP

Friends, this is certainly a parable that we all know well. Perhaps it is for many of us the most familiar of Jesus’ parables. And as is true of all the parables Jesus spoke, this parable is also one that is very practical with regard to spiritual things. It teaches us concerning our life as citizens of the kingdom of God. In this parable Jesus addresses those of us who confess, “We are children of God. We are Christians. We are God’s people.” He speaks to you and I here. And He instructs us concerning what it means to live according to the confession we make.

There is, first of all, the listener who rejects the preaching.

He is not interested in it and therefore bears no fruit. There is no positive change in his life by means of the preaching. This listener is represented by the three kinds of bad soil mentioned in the parable.

But there is also the good listener. He is the one who receives the Word and bears fruit. You can say concerning him, “The preaching makes a difference in his life.”

By means of this parable Christ confronts each of us with the question, “What kind of listener are you to the preaching?”

The tradition had identified four categories of hearer, reflecting the four soil conditions:

The first category fitted the crowds.  The second may have applied to former disciples within the Christian community.  The third would be illustrated later in the narrative by the young rich man.  Matthew hoped that the present members of his community would be numbered in the fourth category. 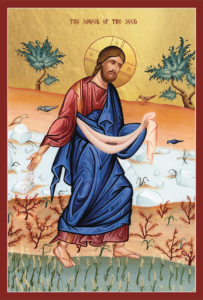