Jesus proposed a parable to the crowds. “The Kingdom of heaven is like a mustard seed that a person took and sowed in a field. It is the smallest of all the seeds, yet when full-grown it is the largest of plants.

It becomes a large bush, and the ‘birds of the sky come and dwell in its branches.'” He spoke to them another parable. “The Kingdom of heaven is like yeast that a woman took and mixed with three measures of wheat flour until the whole batch was leavened.” All these things Jesus spoke to the crowds in parables.

He spoke to them only in parables, to fulfill what had been said through the prophet: I will open my mouth in parables, I will announce what has lain hidden from the foundation of the world.

The Mass intention is for Pauline and Eddie McG Intentions

My friends a couple of Sunday’s ago we heard this Gospel of the parable of the mustard seed.

This was another of Christ’s many agricultural parables. In context, he had led his audience to consider the sower, casting his seed, with the various results arising from the ground upon which it fell. He had told them of the field that produced both wheat and weeds, and now he wants to present them with a symbol of the origin, progress, and consummation of his spiritual kingdom.

To do this, he uses the example of the mustard tree, refers to the small size of its seed and the contrasting height of the grown plant.

Mustard is mentioned five times in Scripture – twice in Matthew, once in Mark, and twice in Luke – always in reference to having faith like a grain of mustard seed.

The tree known in Palestine as a mustard tree has minute seeds and yellow flowers, and grows widely in the Mediterranean.

Most Bible scholars believe that the plant is the black mustard, grown for the production of the condiment, but in New Testament times, it may have been grown for its oil content. The plants, when not crowded too closely with other plants, can grow to be fifteen feet or higher, and have a thick main stem, with branches strong enough to bear the weight of a bird. The parable of the mustard seed exhibits the smallness of the origin, as well as the greatness of the progress and magnitude of his kingdom. 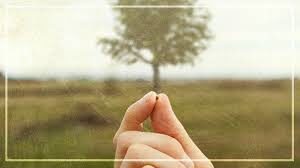