The beheading of John the Baptist
Herod the tetrarch heard about the reputation of Jesus, and said to his court, ‘This is John the Baptist himself; he has risen from the dead, and that is why miraculous powers are at work in him.’

Now it was Herod who had arrested John, chained him up and put him in prison because of Herodias, his brother Philip’s wife. For John had told him, ‘It is against the Law for you to have her.’ He had wanted to kill him but was afraid of the people, who regarded John as a prophet. Then, during the celebrations for Herod’s birthday, the daughter of Herodias danced before the company, and so delighted Herod that he promised on oath to give her anything she asked.

Prompted by her mother she said, ‘Give me John the Baptist’s head, here, on a dish.’ The king was distressed but, thinking of the oaths he had sworn and of his guests, he ordered it to be given her, and sent and had John beheaded in the prison. The head was brought in on a dish and given to the girl, who took it to her mother. John’s disciples came and took the body and buried it; then they went off to tell Jesus.

The Mass intention is for Patrick Doyle RIP

Reflection:
In the Gospel text we are going to examine this morning, we are going to see the lives of two key men. In one man, we will see how stubborn unbelief can be. In the other man, we will see a wonderful example of faith. A man who was committed to what he believed, though it eventually cost him his life on this earth. John the Baptist became a martyr because of his righteousness and trust in Jesus.

My friends John the Baptist is held in the highest regard by the Gospels, even by Jesus himself. He is often presented as very similar to Jesus: Herod thinks Jesus is John Risen from the dead. Yet the Gospels insist that John was also very different from Jesus, especially in what he claimed to be. His style too is very different from that of Jesus, who was an itinerant preacher while people flocked to the desert to hear John. Yet both ended up giving up their lives for the truth. Sometimes we are uncomfortable with different styles in the church, we would prefer all to be the same, as if the church were an army or a political party. I pray for openness and freedom to welcome the different manifestations of the one Spirit.

Speaking truth to power is never easy, it always exacts a price. For John the price was a steep one indeed, yet he was ready to pay it, even though it must have seemed a lost cause even to him. I pray for the courage and wisdom I need to say what I believe to be true, to be always a person of integrity. 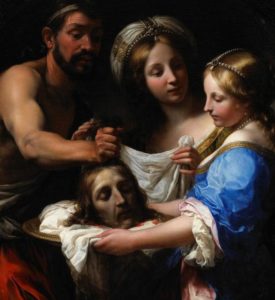