Jesus said to the crowds: “To what shall I compare the people of this generation? What are they like? They are like children who sit in the marketplace and call to one another,

For John the Baptist came neither eating food nor drinking wine, and you said, ‘He is possessed by a demon.’ The Son of Man came eating and drinking and you said, ‘Look, he is a glutton and a drunkard, a friend of tax collectors and sinners.’ But wisdom is vindicated by all her children.”

The Mass intention are for Mary Burrows RIP and Chris B’s intentions.

Jesus lamented the indifference of His contemporaries: ‘We played the flute for you, but you did not dance. We sang a dirge, but you did not weep.’ John the Baptist’s was thought of as demon possessed. Jesus was described as a glutton and drunkard. This attitude was also evident during the time of Saints Cornelius and Cyprian. As pope, St Cornelius’ greatest problem had to do with the Sacrament of Reconciliation and centred on readmission of Christians who renounced their faith during the time of persecution. Cornelius held a synod in Rome in 251 and ordered that relapsed Christians be reconciled with the Church through the usual “medicines of repentance”. His bishop friend Cyprian supported him. Unfortunately, some people in the Church opposed them, most notorious of which was Novatian who proclaimed himself as pope. The Church, up to this time, is still challenged between being rigid and being lax, between being traditional and being progressive. May the wisdom of Jesus bring us all together to worship Him “in spirit and truth” (John 4:23).

· How do you deal with indifference, your own and others?

· “There is one God and one Christ and but one episcopal chair, originally founded on Peter, by the Lord’s authority.” (St Cornelius). How do you show your support to the Pope when his authority is challenged by others, especially by other bishops and priests?

Lord Jesus, thank You for Your Word today. Through the prayers and example of Saints Cornelius and Cyprian, grant us wisdom to set our differences and work together for a more loving and welcoming community of believers. Amen. 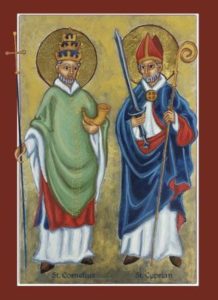