Then his disciples asked him
what the meaning of this parable might be.
He answered,
“Knowledge of the mysteries of the Kingdom of God
has been granted to you;
but to the rest, they are made known through parables
so that they may look but not see, and hear but not understand.

The Mass intention is for Nicola Davies RIP.

Once again, we read the Parable of the Sower. Jesus explained that the seed is God’s Word and we are the paths to where these seed were sown. In our journey of faith, our hearts could be likened to a road, unable to let the Word grow in our hearts. Our hearts may have hard like a rocky ground or perhaps thorny. St John Henry Newman, commenting on today’s Gospel, wrote: “Make the most of the precious time. Delay not…If you are conscious that your hearts are hard, and are desirous that they should be softened, do not despair…He gives grace little by little. It is by coming daily into his presence, that by degrees we find ourselves awed by that presence and able to believe and obey him.”

Lord Jesus, thank You for Your Word today. Humbly we offer our hearts of stone to You. Change it into hearts softened and receptive to Your life-giving Word. Amen. 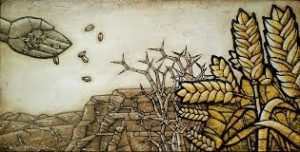