As Jesus passed by,
he saw a man named Matthew sitting at the customs post.
He said to him, “Follow me.”
And he got up and followed him.
While he was at table in his house,
many tax collectors and sinners came
and sat with Jesus and his disciples.
The Pharisees saw this and said to his disciples,
“Why does your teacher eat with tax collectors and sinners?”
He heard this and said,
“Those who are well do not need a physician, but the sick do.
Go and learn the meaning of the words,
I desire mercy, not sacrifice.
I did not come to call the righteous but sinners.”

The Mass intention is for Assumpta Cummins RIP.

Despicable Matthew. That is what today’s saint was in the past. As a tax collector, his fellow Jews hated him for being an agent of the Roman invaders and for being corrupt. Commenting on today’s Gospel, St Bede the Venerable said that Jesus saw Matthew with pity yet chose him to become one of His apostles. St Matthew was one of our four evangelists. Written for a largely Jewish community during his time, Matthew points to Jesus as the hoped-for Messiah.  As we are currently in Year A of the Liturgical Calendar, his Gospel is read in most Sundays this year.  Today’s Gospel is said to have been fundamental in Pope Francis’ calling to the priesthood on the feast of St Matthew in 1953. After receiving the Sacrament of Reconciliation, he felt the mercy of God touching his heart which inspired him to enter religious life. When he became bishop, he chose as his motto the words of St Bede (from his commentary on today’s Gospel): miserando atque eligendo (by God’s merciful choosing). After his election as pope, he kept this motto in his papal coat of arms. By doing so, he underscored his programme of life centred on God’s mercy. Indeed, God looks at all of us with the eyes of mercy. In choosing us, out of His mercy, He will transform us from despicable to delightful.

Lord Jesus, thank You for Your Word today. Through the prayers and example of St Matthew, help us to be open to the transforming power of Your Divine Mercy. Amen. 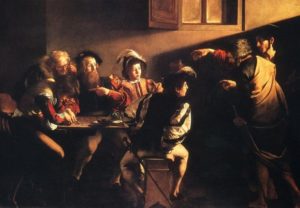