Herod the tetrarch heard about all that was happening,
and he was greatly perplexed because some were saying,
“John has been raised from the dead”;
others were saying, “Elijah has appeared”;
still others, “One of the ancient prophets has arisen.”
But Herod said, “John I beheaded.
Who then is this about whom I hear such things?”
And he kept trying to see him.

The Mass intention is for Patricia and Michael K’s intentions.

Herod, despite his power and influence, was an unhappy man. While fishermen, tax collectors, women, children, and simple folk had faith in the Lord, Herod did not. His desire to see Jesus was founded on curiosity. To “know” the Lord requires the commitment of faith. Mary, whose feast day under the title of Our Lady of Walsingham we celebrate today, showed strong faith in God. In the Annunciation, she surrendered herself to God’s will and became the Mother of the Redeemer. Later, she went in haste to Judea to share the Good News with her cousin Elizabeth. At the foot of the Cross, she accepted from her dying Son her new role as Mother of all believers. During Pentecost, she welcomed the power of the Holy Spirit which gave birth to the Church. Such faith in God was shown too by Richeldis de Faverches, lady of the manor of Walsingham, when she was instructed by Our Lady in a vision to build in her village a replica of the house of Nazareth where the Annunciation took place. Considered to be one of the great pilgrimage centres of medieval times, the shrine was destroyed during the reign of Henry VIII. It was during the 19th and early 20th centuries that pilgrimage to Walsingham was revived. In March this year, a rededication of England as “Mary’s dowry” was held across churches nationwide. Herod’s curiosity withered. Mary’s faith endures!

Lord Jesus, thank You for Your Word today. Through the prayers and example of Mary, Our Lady of Walsingham, may our faith be centred on an encounter with You, on the contemplation of Your life, and on the awareness of Your presence. Amen. 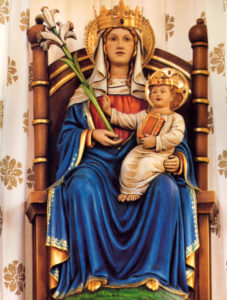