Jesus said to the chief priests and elders of the people:
“What is your opinion?
A man had two sons.
He came to the first and said,
‘Son, go out and work in the vineyard today.’
He said in reply, ‘I will not, ‘
but afterwards changed his mind and went.
The man came to the other son and gave the same order.
He said in reply, ‘Yes, sir, ‘but did not go.
Which of the two did his father’s will?”
They answered, “The first.”
Jesus said to them, “Amen, I say to you,
tax collectors and prostitutes
are entering the kingdom of God before you.
When John came to you in the way of righteousness,
you did not believe him;
but tax collectors and prostitutes did.
Yet even when you saw that,
you did not later change your minds and believe him.”

I think all of us have behaved like one of the sons in today’s Gospel when our parents and elders have told us to do something and we either said no, but did it anyway or we said yes, but did not do it at all. In addressing this parable to the chief priests and elders, Jesus has turned the tables against them. Highly regarded by society as religious, they were judged by the Lord as the son who initially said yes but did not follow his father’s orders. Unlike the people of ill repute such as tax collectors and prostitutes who believed the teachings of John the Baptist and changed their ways. Being religious or belonging to the Church hierarchy does not guarantee a perception to the way of righteousness. A story goes that during the Conclave 7 years ago, when Cardinal Jorge Mario Bergoglio has gained majority of votes, his friend Cardinal Claudio Hummes leaned over and whispered to him “remember the poor”. Why? I think, the poor has something to offer for the good of the Church. They have a perception to the way of righteousness. “For theirs is the kingdom of heaven” (Matthew 5:3).

Lord Jesus, thank You for Your Word today. Grant us eyes to see Your way of righteousness so that we may live what we profess. Amen. 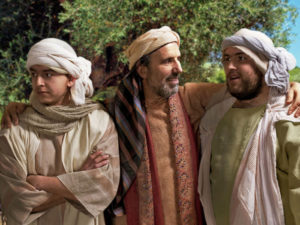