Jesus saw Nathanael coming toward him and said of him,
“Here is a true child of Israel.
There is no duplicity in him.”
Nathanael said to him, “How do you know me?”
Jesus answered and said to him,
“Before Philip called you, I saw you under the fig tree.”
Nathanael answered him,
“Rabbi, you are the Son of God; you are the King of Israel.”
Jesus answered and said to him,
“Do you believe
because I told you that I saw you under the fig tree?
You will see greater things than this.”
And he said to him, “Amen, amen, I say to you,
you will see heaven opened
and the angels of God ascending and descending on the Son of Man.”

The Mass intention is for the Brothers of Saint John of God.

The late Cardinal Jaime Sin’s motto was “Serviam” (I will serve). It was the cry of St Michael the Archangel in response to Lucifer’s “Non serviam” (I will not serve.). St Michael’s name means “Who is like God?”. The “Prince of the Heavenly Host”, this archangel is the leader of that great army of angels. St Gabriel’s name means “God’s strength”. He was the bearer of Good News to Mary and Zechariah. Tradition has it that he was also the angel who appeared to Joseph in a dream and to the shepherds when Christ was born, as well as the one who strengthened Jesus in His Agony in the Garden. St Raphael’s name means “God has healed”.  In the Book of Tobit, this angel brought back Tobias’ sight. Notice that their names have something in common: God. Unlike Lucifer who proudly defied the Lord, these archangels humbly stood by Him. As Christians, we too are called to do the same. In today’s Gospel, Jesus tells Nathanael that he will see “the angels of God ascending and descending on the Son of Man.” Wouldn’t it be wonderful to be part of their number?

Lord Jesus, thank You for Your Word today.  Through the prayers and example of Saints Michael, Gabriel, and Raphael, raise us to be a people who will faithfully serve You. Amen. 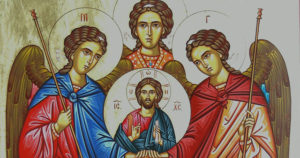