Jesus again in reply spoke to the chief priests and elders of the people
in parables, saying,
“The kingdom of heaven may be likened to a king
who gave a wedding feast for his son.
He dispatched his servants
to summon the invited guests to the feast,
but they refused to come.
A second time he sent other servants, saying,
‘Tell those invited: “Behold, I have prepared my banquet,
my calves and fattened cattle are killed,
and everything is ready; come to the feast.”’
Some ignored the invitation and went away,
one to his farm, another to his business.
The rest laid hold of his servants,
mistreated them, and killed them.
The king was enraged and sent his troops,
destroyed those murderers, and burned their city.
Then he said to his servants, ‘The feast is ready,
but those who were invited were not worthy to come.
Go out, therefore, into the main roads
and invite to the feast whomever you find.’
The servants went out into the streets
and gathered all they found, bad and good alike,
and the hall was filled with guests.
But when the king came in to meet the guests,
he saw a man there not dressed in a wedding garment.
The king said to him, ‘My friend, how is it
that you came in here without a wedding garment?’
But he was reduced to silence.
Then the king said to his attendants, ‘Bind his hands and feet,
and cast him into the darkness outside,
where there will be wailing and grinding of teeth.’
Many are invited, but few are chosen.”

The Mass intention is for Mary Connell RIP (40th Anniversary).

It is worth noting that Jesus told this parable to the Jewish authorities and not to the crowd. In the Old Testament, Israel was the People of God. However, its leaders – the chief priests, and elders – have failed miserably in God’s call to conversion. Through their bad example, they have misled the people. As a result, God’s Chosen People rejected His invite to the wedding feast. Like in the parable, some of God’s servants such as the prophets, apostles, and His own Son were killed which provoked His anger and have their city – Jerusalem – destroyed in the year 70. The king’s invitation to people regardless if they were good or bad tells us that the feast is open to all. Unfortunately, one guest in the parable was not dressed appropriately and was thrown out of the banquet. This implies that the person did not have any regard for the king. The wedding garment represents the Jews’ need to purify themselves to be worthy to stand in the Lord’s presence. The Holy Mass is a foretaste of that wedding feast.  Everyone is welcome to this celebration. If we appreciate God’s graciousness to us, we must have a pure heart, otherwise: “whoever eats the bread or drinks the cup of the Lord in an unworthy manner will be guilty of sinning against the body and blood of the Lord.” (1 Corinthians 11:27).

Lord Jesus, thank You for Your Word today. Grant us a pure heart so that we may worthily partake of Your Body and Blood. During Prisons Week, help us to share the joy of the Gospel to prisoners and their families, victims of offenders, prisons staff, and all those involved in the Prisons Ministry. Amen. 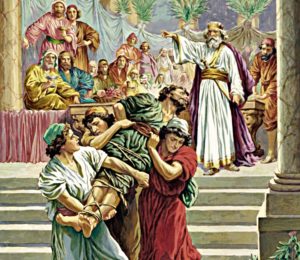