After Jesus had spoken,
a Pharisee invited him to dine at his home.
He entered and reclined at table to eat.
The Pharisee was amazed to see
that he did not observe the prescribed washing before the meal.
The Lord said to him, “Oh you Pharisees!
Although you cleanse the outside of the cup and the dish,
inside you are filled with plunder and evil.
You fools!
Did not the maker of the outside also make the inside?
But as to what is within, give alms,
and behold, everything will be clean for you.”

The Mass intention is for Teresa Y’s Intentions.

In today’s Gospel, Jesus criticized the Pharisees for giving more emphasis on rituals than dispensing mercy such as giving alms to the poor. In another Gospel, Jesus said that “The Sabbath was made for man, not man for the Sabbath.” (Mark 2:27). Indeed, laws and institutions, such as the Church, were created for the people’s well-being and not the other way around. Laws and institutions are there to set people free – from ignorance, bigotry, injustice, and other evils of society. St Edward the Confessor, whose feast day we commemorate today, ruled England from 1042 until his death in 1066. It has been said that “[A]fter many decades of fighting in England, Edward’s reign was to be one of almost unbroken peace. He managed the country well, ending the Danegeld (levying of heavy taxes) and living within the income of his royal estates instead of drawing taxes.” St Edward, Patron Saint of England until 1415, took heed of Jesus’ call for mercy. The Lord tells us that if we do so, “everything will be clean for you.”

Lord Jesus, thank You for Your Word today. Through the prayers and example of St Edward, make us instruments of Your love which will set us free. Amen. 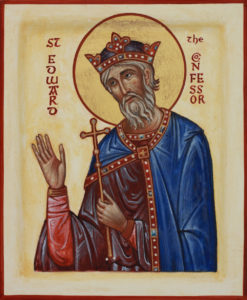