The Lord said:
“Woe to you Pharisees!
You pay tithes of mint and of rue and of every garden herb,
but you pay no attention to judgment and to love for God.
These you should have done, without overlooking the others.
Woe to you Pharisees!
You love the seat of honor in synagogues
and greetings in marketplaces.
Woe to you!
You are like unseen graves over which people unknowingly walk.”

Then one of the scholars of the law said to him in reply,
“Teacher, by saying this you are insulting us too.”
And he said, “Woe also to you scholars of the law!
You impose on people burdens hard to carry,
but you yourselves do not lift one finger to touch them.”

The Mass intention is for Nadine E’s Intentions.

In today’s Gospel, both Pharisees and scholars of the law were called to task by Jesus. The Pharisees were lambasted for being legalistic and proud. The scholars of the law were attacked for imposing laws that burdened the people. The Pharisees and scholars of the law see the law as a tool to get rid of rather than rehabilitate people. This myopic view of rendering justice to everyone is still observed in various parts of the world. Even in the Church, there are leaders who emphasize the letter of the law and not the spirit of the law. St Callistus I, whose memorial we celebrate today, was a slave, deacon, pope, and martyr. Before becoming pope, he was blamed for financial mismanagement in a prominent family’s household. As a result, he was sentenced to do manual labour in Rome and was later exiled to work in the mines of Sardinia. Through the efforts of Pope Victor, he and other Christian slaves were pardoned and released. Returning to Rome, he was given charge of a cemetery which still bears his name. As pope, he was opposed for teaching that the Church could forgive even the gravest of sinners. I think, the mercy that he experienced when he was pardoned inspired him to give mercy to the worst sinners during his time. This pope saw in the worst sinners the need to be restored. While Jesus says, “Woe to you Pharisees…Woe to you scholars of the law!”, he tells this pope “Blessed are the merciful, for they will be shown mercy.” (Matthew 5:7).

Lord Jesus, thank You for Your Word today. Through the prayers and example of St Callistus I, grant us the grace never to give up on people as You have never given up on us. Amen. 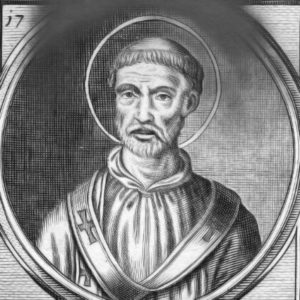