Someone in the crowd said to Jesus,
“Teacher, tell my brother to share the inheritance with me.”
He replied to him,
“Friend, who appointed me as your judge and arbitrator?”
Then he said to the crowd,
“Take care to guard against all greed,
for though one may be rich,
one’s life does not consist of possessions.”

Then he told them a parable.
“There was a rich man whose land produced a bountiful harvest.
He asked himself, ‘What shall I do,
for I do not have space to store my harvest?’
And he said, ‘This is what I shall do:
I shall tear down my barns and build larger ones.
There I shall store all my grain and other goods
and I shall say to myself, “Now as for you,
you have so many good things stored up for many years,
rest, eat, drink, be merry!”’
But God said to him,
‘You fool, this night your life will be demanded of you;
and the things you have prepared, to whom will they belong?’
Thus will it be for the one who stores up treasure for himself
but is not rich in what matters to God.”

The Mass intention is for Teresa Brett RIP.

Eight French missionaries –Frs John de Brebeuf, Isaac Joques, Gabriel Lalement, Antoine Daniel, Charles Garnier, Noel Chabanel, laybrother Rene Goupil, and laymen Jean de la Lande – were martyred in North America between 1642 and 1649. Initially they ministered to French settlers in Quebec and later began evangelizing the natives living within that area. Their work expanded to the Huron tribes. These tribes welcomed the missionaries. Everything looked rosy until the Iroquois, the Huron’s enemies, started attacking supply routes between the mission station and Quebec. The missionaries became victims of the hostilities caused by the Iroquois.

In today’s Gospel, Jesus tells us a parable of the rich man. The man was enjoying his life and thought to himself “rest, eat, drink, be merry!” However, God saw the rich man as a fool for believing that having possessions is what matters in life. “The Lord made us, we belong to him,” goes our Responsorial Psalm today. With greed having overtaken the rich man, he began to “belong” to his possessions. As we honour our holy martyrs today, may we replace greed with generosity so that, detached from material possessions, we may use them to alleviate the sufferings of those around us. Doing so, we will store treasures in heaven “where moths and vermin do not destroy, and where thieves do not break in and steal.” (Matthew 6:20)

Lord Jesus, thank You for Your Word today. Through the prayers and example of Saints John de Brébeuf and Isaac Jogues and companion martyrs, teach us to generously share the blessings You have given us. Amen. 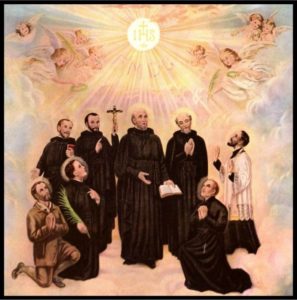