Jesus said, “What is the Kingdom of God like?
To what can I compare it?
It is like a mustard seed that a man took and planted in the garden.
When it was fully grown, it became a large bush
and the birds of the sky dwelt in its branches.”

Again he said, “To what shall I compare the Kingdom of God?
It is like yeast that a woman took
and mixed in with three measures of wheat flour
until the whole batch of dough was leavened.”

The Mass intention is for Leonard Ryder RIP.

Who would have imagined how a small band of simple people, led by a carpenter’s son, would grow into a worldwide religion? Such small group can be compared to a mustard seed or yeast which, on their own, have no value. What is the secret behind the growth of the Christian community? It is God’s grace. In our hearts, the mustard seed is planted. Are we nurturing it? In our hearts, the yeast of Christ is present. Have we mixed it with our daily living? The mustard seed’s power can only be revealed when it is planted and becomes a large bush that “the birds of the sky dwelt in its branches.” The yeast can only be effective when it is mixed with flour.

Sts Louis and Zelie Martin were the parents of St Therese of Lisieux. In their youth, both considered entering religious life, but eventually discovered that they were called to a different vocation. Their marriage was blessed with nine children, five of whom entered religious life. They lived a comfortable life but endured trials such as the death of four children at an early age and a rebellious daughter. Despite these, their faith remained strong. St Therese once wrote: “God gave me a father and a mother who were more worthy of heaven than of earth.” This holy couple nurtured the mustard seed and yeast in their hearts. They allowed God’s overflowing grace to work in their lives. We are called to do the same.

Lord Jesus, thank You for Your Word today. Through the prayers and example of Sts Louis and Zelie Martin help us to be open to Your grace so that we can contribute to the coming of Your Kingdom. Amen. 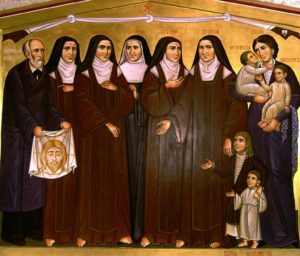