Jesus went up to the mountain to pray,
and he spent the night in prayer to God.
When day came, he called his disciples to himself,
and from them he chose Twelve, whom he also named Apostles:
Simon, whom he named Peter, and his brother Andrew,
James, John, Philip, Bartholomew, Matthew,
Thomas, James the son of Alphaeus,
Simon who was called a Zealot,
and Judas the son of James,
and Judas Iscariot, who became a traitor.

The Mass intention is for Eddie McLoughlin RIP.

Sts Simon and Jude, our Saints of the Day, were apostles of the Lord. Unlike other apostles such as Sts Peter or John, the Gospels have mentioned these saints’ names for a few times only. According to tradition, Simon preached the Gospel in Edessa while Jude in Egypt. They met in Persia where they were martyred on the same day. St Jude was beaten to death with a club; St Simon was sawed into pieces. Simon has been called “the Zealot”. There are various reasons why he was called as such. Probably he belonged to a group of Jews who were associated with uprisings and expecting that the Messiah will come and free the people from the Roman invaders. Another possible reason was that he might be zealous for the Law of Moses. Or perhaps he was zealous in following Jesus. Whatever is the reason, the Gospel writers used this description to distinguish him from other Simons such as Simon Peter.

St Jude used to be confused with the other apostle who betrayed Jesus. Because of that, people did not pray to him, unless one is desperate. That was why he was called “Saint of Desperate Cases”.  He is also called Thaddeus to distinguish him from Judas Iscariot. Of all apostles, his iconography includes an image of Jesus (aka The Image of Edessa) which the apostle gave to King Abgar. These apostles tell us that one does not need to be a celebrity to proclaim the Gospel. All one needs is commitment to one’s mission and God would do the rest.

Lord Jesus, thank You for Your Word today. Through the prayers and example of Sts Simon and Jude, grant us the grace to follow You and proclaim Your Good News to all, especially the last, the least, and the lost. Amen. 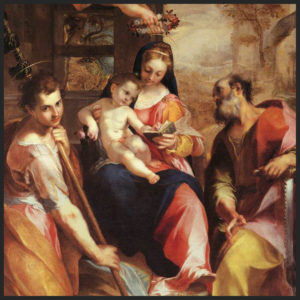