On a sabbath Jesus went to dine
at the home of one of the leading Pharisees,
and the people there were observing him carefully.
In front of him there was a man suffering from dropsy.
Jesus spoke to the scholars of the law and Pharisees in reply, asking,
“Is it lawful to cure on the sabbath or not?”
But they kept silent; so he took the man and,
after he had healed him, dismissed him.
Then he said to them
“Who among you, if your son or ox falls into a cistern,
would not immediately pull him out on the sabbath day?”
But they were unable to answer his question.

The Mass intention is for Una & Alan R’s Intentions.

Jesus was again among people who were trying to catch Him flout the law. The scholars of the law Pharisees were too rigid in their observance of the law so much so that doing something good, such as healing, on the sabbath was beyond them. By healing the man suffering from dropsy, Jesus is making it clear: It is lawful to cure on the sabbath. Jesus taught the scholars of the law and Pharisees to be sensible, to think outside of the box. Such sensibility is captured when He said, “Who among you, if your son or ox falls into a cistern, would not immediately pull him out on the sabbath day?”  I remember one Sunday, many years ago in the Philippines. As we were going out of the church, there was an old woman who seemed to have a memory loss. While she could recall what street she lives, she could not remember her exact address. My aunt told us to accompany the old woman, encouraging us to do good deeds on a Sunday. As we made our way to the street the old woman told us, we met her grandson who thanked us for bringing her home.

Helen Alvare, a law professor, wrote: “It is clear to me that the more I pray fervently for others, the more I learn to co-suffer with others, the more I am making the only kind of progress that counts in this life: learning to love. It teaches me also to affirm others’ radical equality with me and to understand my own suffering in context…” God cannot be limited by time and space, otherwise He would not be God. God, through His Son Jesus, is always here to save His people regardless if it is Monday or Sunday. God wills that everyone be saved. He is counting on us to do our share.

Lord Jesus, thank You for Your Word today. As we immerse ourselves in prayer, help us to contribute in completing Your good works for the salvation of the world. Amen. 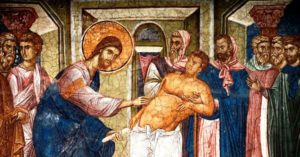