A Blind Beggar Receives His Sight

As Jesus approached Jericho, a blind man was sitting by the roadside begging.  When he heard the crowd going by, he asked what was happening. They told him, “Jesus of Nazareth is passing by.”

He called out, “Jesus, Son of David, have mercy on me!”

Those who led the way rebuked him and told him to be quiet, but he shouted all the more, “Son of David, have mercy on me!”

Jesus stopped and ordered the man to be brought to him. When he came near, Jesus asked him,  “What do you want me to do for you?”

Jesus said to him, “Receive your sight; your faith has healed you.”  Immediately he received his sight and followed Jesus, praising God. When all the people saw it, they also praised God.

The Gospel of the Lord ……

The Mass Intention is for Mother Anne Magdalen RIP

We all know what it means to be blind.

The Gospel today is giving us an example of one of those blind people called Bartimaeus.  He always sat by the way begging for alms from the people passing by.

This day was different, there was a big crowd , so Bartimaeus  asked to know why there were so many people.

He was told it was Jesus the Nazarene passing, he had heard of his teaching, healing and performing miracles.

Bartimaeus then thought this was the opportunity so he began to shout, “Jesus , Son of David have pity on me!”

The people tried to shut him up but he shouted the more,   Jesus ordered them to bring Bartimaeus to him, then Jesus asked him, “ Bartimaeus what do you want me to for you”  Bartimaeus responded, “ Give me my sight!”

The blind beggar Bartimaeus is teaching us an important lesson about faith in Our Lord Jesus Christ. His fearless persistent faith helped him to obtain what he was after.  He had his opportune moment to cry out to Jesus.

It is the same with you today, you may not be there tomorrow. You are hearing the Word now calling you to come to him for mercy.

We should persistently turn and look for Jesus and appeal for his mercy.

If you cry to Jesus in faith he will listen.

Before God we are wretched sinners, spiritually blind, we need his mercy.

Always move forward giving glory to God and encourage others. 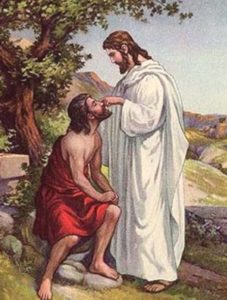