Jesus at the Temple

When Jesus entered the temple courts, he began to drive out those who were selling.  “It is written,” he said to them, “‘My house will be a house of prayer’; but you have made it ‘a den of robbers.”   Every day he was teaching at the temple. But the chief priests, the teachers of the law and the leaders among the people were trying to kill him. Yet they could not find any way to do it, because all the people hung on his words.

The Mass Intention is for Shelley Doyle RIP

Then Jesus went into the Temple and began driving out those who were selling, 46 ‘According to scripture’, he said, ‘my house will be a house of prayer, but you have turned it into a robbers’ den.’ 47 He taught in the Temple every day. The chief priests and the scribes, with the support of the leading citizens, tried to do away with him, 48 but they did not see how they could carry this out because the people as a whole hung on his words.

With Jesus there is no mediocrity, it is always yes or no, black, or white. Just as Jesus commanded the evil spirits to leave the bodies of the sick, so He also treats those who do not respect the Temple, which was built as a house of prayer, for making a mockery of God’s holy place. The Temple authorities overlooked the money lenders and traders but condemned Jesus for his gentle and loving approach which attracted people and made them jealous. There is a strong contrast between, fear of the rigid laws enforced by the chief priests and the scribes, and the loyalty of the faithful followers of Jesus, who respond to His sincerity, truth and love. Our Churches are places of peace and reverence, a sanctuary, for the Eucharistic presence hidden in the Tabernacle. Even when we pass by outside, we can make the sign of the cross and say a prayer in recognition that God is always with us. 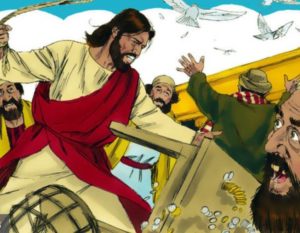