The light shines in the darkness, and the darkness did not overcome it. There was a man sent from God, whose name was John. He came as a witness to testify to the light, so that all might believe through him. He himself was not the light, but he came to testify to the light. The true light, which enlightens everyone, was coming into the world. He was in the world, and the world came into being through him; yet the world did not know him.

He came to what was his own, and his own people did not accept him. But to all who received him, who believed in his name, he gave power to become children of God, who were born, not of blood or of the will of the flesh or of the will of man, but of God. And the Word became flesh and lived among us, and we have seen his glory, the glory as of a father’s only son, full of grace and truth. (John testified to him and cried out, ‘This was he of whom I said, “He who comes after me ranks ahead of me because he was before me.” ’)

From his fullness we have all received, grace upon grace. The law indeed was given through Moses; grace and truth came through Jesus Christ. No one has ever seen God. It is God the only Son, who is close to the Father’s heart, who has made him known.

The Mass intention is for Patricia and Michael Kodua

Our Gospel today presents us with the WORD as we come to the end of a year and listen to what God’s word says to us. It helps us look back to learn and look forward in hope.

God’s word is a creative word who gives life to all, in love. Jesus is the Word uttered by the Father, the word of hope and promise.

Jesus, is God’s message to us – he is our Good News. We know that God loved the world and sent Jesus among us. He is the ‘only Son who is close to the Father’s heart, who has made him known’.

It has been an eventful year that leaves us with lasting memories. We have the fidelity of God to sustain us in the many challenges of life. And particularly with the COVID-19 Pandemic, we need light in the darkness and hope in the uncertainty that is around us.

God has given us the Eternal Word and the living word of scripture to guide us. We pray to welcome and appreciate those words more fully, asking that our words may be in harmony with them. 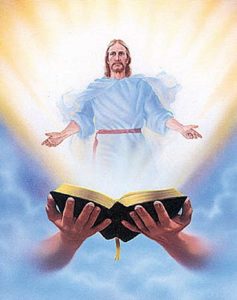