After John had been arrested,
Jesus came to Galilee proclaiming the Gospel of God:
“This is the time of fulfillment.
The Kingdom of God is at hand.
Repent, and believe in the Gospel.”

As he passed by the Sea of Galilee,
he saw Simon and his brother Andrew casting their nets into the sea;
they were fishermen.
Jesus said to them,
“Come after me, and I will make you fishers of men.”
Then they left their nets and followed him.
He walked along a little farther
and saw James, the son of Zebedee, and his brother John.
They too were in a boat mending their nets.
Then he called them.
So they left their father Zebedee in the boat
along with the hired men and followed him.

The Mass intention is for Stephanie Doherty RIP.

John the Baptist’s arrest and subsequent martyrdom paved the way for Jesus to proclaim the coming of God’s Kingdom and the call to conversion. These two come together. For God’s reign to take root in our hearts, we need to root out from our hearts those that are incompatible with God: sin, pride, envy, bigotry, selfishness, injustice, etc. Jesus’ ministry would not be possible without collaborators and so He called His first followers. Did they have an idea of the cost of their discipleship? Perhaps not. In Jesus’ Passion, Peter would deny Him three times. It was only John who would stay with Him until the end. We too are collaborators of Jesus through our involvement in the parish or in our own vocation. Like the first disciples, we too do not have a clear idea of what and how it is to be a follower. We succeed, but we also fail. What keeps us attracted to Jesus and His Gospel? I think it is the Lord’s gentle voice telling us: “Come after me.”

Lord Jesus, thank You for Your Word today. Help us to always choose to follow You so that Your Kingdom would truly come. Amen. 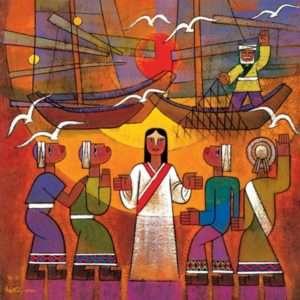