A leper came to him and kneeling down begged him and said,
“If you wish, you can make me clean.”
Moved with pity, he stretched out his hand,
touched the leper, and said to him,
“I do will it. Be made clean.”
The leprosy left him immediately, and he was made clean.
Then, warning him sternly, he dismissed him at once.
Then he said to him, “See that you tell no one anything,
but go, show yourself to the priest
and offer for your cleansing what Moses prescribed;
that will be proof for them.”
The man went away and began to publicize the whole matter.
He spread the report abroad
so that it was impossible for Jesus to enter a town openly.
He remained outside in deserted places,
and people kept coming to him from everywhere.

The Mass intention is for Sue J’s and all her loved one’s.

We are all social beings. We need to be part of a community. This was something the leper would have wanted, had it not been because of his illness. Such was his yearning that he humbly approached Jesus and asked Him to heal him. By healing the leper, Jesus restored the man not only to his health, but also to the community. And being back into the fold, the healed man “went away and began to publicize” what Jesus did. Leprosy caused the man to lose his dignity, a loss that seemed forever. In Jesus, that dignity was restored. Can we blame the man for disobeying Jesus’ instructions not to tell anyone of what happened? For someone who has been healed of an incurable disease, telling others about Jesus was the man’s way of thanking the Lord. The news of a leper made clean hit the headlines: people kept coming to Jesus from everywhere.

Lord Jesus, thank You for Your Word today. Through Your death and resurrection, You have restored our dignity as adopted children of the Father. Like the leper You have healed, may we also encourage others to come to You. Amen. 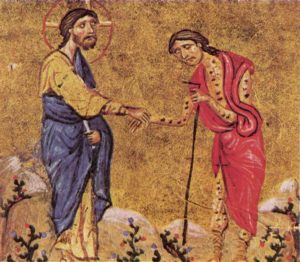