Jesus entered the synagogue.
There was a man there who had a withered hand.
They watched Jesus closely
to see if he would cure him on the sabbath
so that they might accuse him.
He said to the man with the withered hand,
“Come up here before us.”
Then he said to the Pharisees,
“Is it lawful to do good on the sabbath rather than to do evil,
to save life rather than to destroy it?”
But they remained silent.
Looking around at them with anger
and grieved at their hardness of heart,
Jesus said to the man, “Stretch out your hand.”
He stretched it out and his hand was restored.
The Pharisees went out and immediately took counsel
with the Herodians against him to put him to death.

The Mass intention is for Thanksgiving to all the Saints.

St Sebastian is said to have been a member of the Roman Army who was martyred around the year 300 during the persecutions of Diocletian. He was ordered to be killed by having him tied to a stake and used as a target practice. His body was described as “full of arrows as an urchin”. He was commonly invoked as protector against plagues because, according to historical records, he defended Rome from a plague in 680. It has been said that his association with plagues was because he survived death being shot full of arrows. As we celebrate St Sebastian’s life and witnessing to Jesus, it is worth thinking of the pandemic that besets the world today. It is worth asking ourselves what we are doing to address this. Sometimes, it is quite easy to harden our hearts, like those people in the synagogue. However, Jesus challenges us to be clothed in love that we can share with others, especially Covid-19 victims, and their families. He asks us not to despair, but to have faith that He will bring His healing in His own perfect time.

Lord Jesus, thank You for Your Word today. Through the prayers and example of St Sebastian, heal our hardened hearts that we may not be afraid, but believe in Your saving power. Amen. 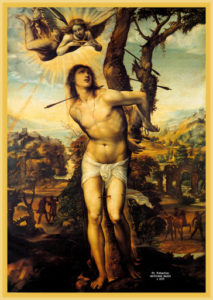