Jesus went up the mountain and summoned those whom he wanted
and they came to him.
He appointed Twelve, whom he also named Apostles,
that they might be with him
and he might send them forth to preach
and to have authority to drive out demons:
He appointed the Twelve:
Simon, whom he named Peter;
James, son of Zebedee,
and John the brother of James, whom he named Boanerges,
that is, sons of thunder;
Andrew, Philip, Bartholomew,
Matthew, Thomas, James the son of Alphaeus;
Thaddeus, Simon the Cananean,
and Judas Iscariot who betrayed him.

The Mass intention is for Deceased Members of the Woodward family.

St Vincent, Spain’s first martyr, was a deacon serving the Bishop of Zaragoza during the Roman persecution of Christians in the 4th century. Prudentius, a poet, presents how Vincent suffered martyrdom in a series of harrowing tortures. In today’s Gospel, Jesus appointed the Twelve Apostles. Like Jesus, all Apostles suffered persecution. Judas Iscariot failed because of his disloyalty and despair. Like our Lord, most of the Apostles died violently. Vincent shared in Christ’s suffering. A story goes that Vincent laughed at every instrument of torture and withstood all of them so much so that his torturers relented and allowed fellow Christians to visit him in prison where he soon died. Where did he get that strength? It came from the Holy Spirit. The Gospel tells us that Jesus called those whom He wanted. Jesus knew the His followers He could trust. And if He trusts that person, surely, He will grant Him the Spirit. Jesus continues to call those whom He wanted. It could be you. Do not be afraid. Put your trust in Him!

Lord Jesus, thank You for Your Word today. Through the prayers and example of St Vincent of Zaragoza, fill us with Your Spirit that we may be with You through thick and thin. Amen. 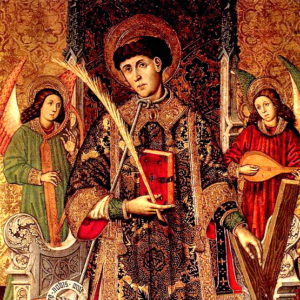