After John had been arrested,
Jesus came to Galilee proclaiming the gospel of God:
“This is the time of fulfillment.
The kingdom of God is at hand.
Repent, and believe in the gospel.”

As he passed by the Sea of Galilee,
he saw Simon and his brother Andrew casting their nets into the sea;
they were fishermen.
Jesus said to them,
“Come after me, and I will make you fishers of men.”
Then they abandoned their nets and followed him.
He walked along a little farther
and saw James, the son of Zebedee, and his brother John.
They too were in a boat mending their nets.
Then he called them.
So they left their father Zebedee in the boat
along with the hired men and followed him.

The Mass intention is for Bridget and Patrick Doyle RIP and Private Intention of Neil.

When Deacon Martyn was ordained, the bishop placed the Book of Gospels in Martyn’s hands and said “Receive the Gospel of Christ whose herald you have become. Believe what you read, teach what you believe, and practice what you teach.” Regardless of our vocation, we too are called to become heralds of the Gospel. In our participation in the liturgy or in our own private prayer, we read or listen to God’s Word. And because it is God’s Word and no one else’s, we believe in it, we put our trust in it. Like any gift, God’s Word must be shared. We must teach it to those around us. It could be our family, colleagues, clients, or even strangers. Sharing the Word would be useless if we do not live it. Living it requires humility and openness like what Simon, Andrew, James, and John had shown when Jesus called them to follow Him to become fishers of people. Witnessing to it requires that zeal in one’s heart like the hearts of those two disciples who initially failed to recognise Jesus as they travelled to Emmaus. As we celebrate Sunday of the Word of God, let us ask for the grace to become God’s Living Word to win more souls for Christ.

Lord Jesus, thank You for Your Word today. Open our minds to understand the Scriptures. Open our hearts to welcome its message of unity. Amen. 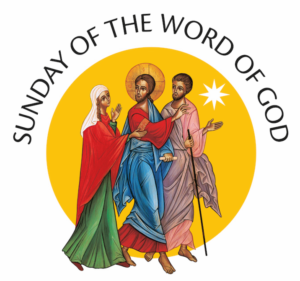