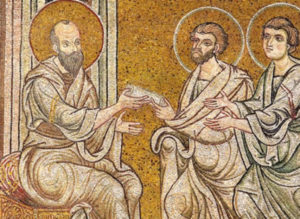 The Mass intention is for Dennis Duffield RIP.

Yesterday, we remembered St Paul. Today, we commemorate his two close collaborators Sts Timothy and Titus. St Paul described Timothy as “our brother [and] God’s helper in spreading the Good News of Christ” (1 Thessalonians 3:2). As for Titus, he considered him as a “colleague and fellow worker” (2 Corinthians 8:23). Through Baptism, our life has never been the same again. We are called to be like Jesus whose constant concerns were His Father and souls, according to Blessed Concepcion Cabrera de Armida.  Timothy and Titus, as coworkers of St Paul, shared in Jesus’ concerns. Timothy served as bishop in Ephesus while Titus in Crete. Both evangelized in their own communities and gave up their lives for the faith. By being faithful, they are counted among the brothers, sisters, and mother which Jesus was alluding to in today’s Gospel. We too share in such kinship through Baptism.

Lord Jesus, thank You for Your Word today. Through the prayers and example of Sts Timothy and Titus inflame our hearts to always seek the Father’s will and the salvation of souls. Amen.