Jesus took Peter, James, and John
and led them up a high mountain apart by themselves.
And he was transfigured before them,
and his clothes became dazzling white,
such as no fuller on earth could bleach them.
Then Elijah appeared to them along with Moses,
and they were conversing with Jesus.
Then Peter said to Jesus in reply,
“Rabbi, it is good that we are here!
Let us make three tents:
one for you, one for Moses, and one for Elijah.”
He hardly knew what to say, they were so terrified.
Then a cloud came, casting a shadow over them;
from the cloud came a voice,
“This is my beloved Son.  Listen to him.”
Suddenly, looking around, they no longer saw anyone
but Jesus alone with them.

As they were coming down from the mountain,
he charged them not to relate what they had seen to anyone,
except when the Son of Man had risen from the dead.
So they kept the matter to themselves,
questioning what rising from the dead meant.

The Mass intention is for Brenda Williams RIP.

You may have experienced being in a lovely place where everything seems perfect: you are having a wonderful time with yourself or with your loved ones, there’s good food, beautiful scenes, and perhaps relaxing music. Then the alarm clock went off. Oh, it was just a dream! Peter, James, and John thought too to themselves when they saw Jesus in His glory conversing with two of Israel’s Old Testament personalities. Oh, it was just a dream! And yet, that experience foretells already what would happen to Jesus when He “had risen from the dead”. The apostles let that experience (or dream) settle in their hearts as they went down the mountain and accompanied the Lord through the rest of His public ministry. They witnessed how Jesus would be welcomed initially as King but would be crucified later as a criminal. Interestingly, Peter, James, and John were the same apostles who were with Jesus in His Agony in the Garden. Sadly, Peter and James as well as the rest of the apostles, except for John, would desert the Lord when He needed them most. They failed to realize that without the Cross, there will be no Resurrection from the dead. They failed to heed what that voice from the cloud told them: “This is my beloved Son.  Listen to him.”  Jesus, the ever-faithful God, would later reveal and share His glory with them. That will also hold true for us. This dream, as well as others that we have been praying and working hard for, will come true in God’s perfect time – be patient and listen.

Lord Jesus, thank You for Your Word today. Grant us the grace to be patient and listen to You as we work for and await our future glory with You. Amen.

Suggested Lenten penance: Listen to someone you would otherwise pass by. 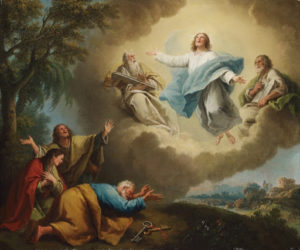