Since the Passover of the Jews was near,
Jesus went up to Jerusalem.
He found in the temple area those who sold oxen, sheep, and doves,
as well as the money changers seated there.
He made a whip out of cords
and drove them all out of the temple area, with the sheep and oxen,
and spilled the coins of the money changers
and overturned their tables,
and to those who sold doves he said,
“Take these out of here,
and stop making my Father’s house a marketplace.”
His disciples recalled the words of Scripture,
Zeal for your house will consume me.
At this the Jews answered and said to him,
“What sign can you show us for doing this?”
Jesus answered and said to them,
“Destroy this temple and in three days I will raise it up.”
The Jews said,
“This temple has been under construction for forty-six years,
and you will raise it up in three days?”
But he was speaking about the temple of his body.
Therefore, when he was raised from the dead,
his disciples remembered that he had said this,
and they came to believe the Scripture
and the word Jesus had spoken.

While he was in Jerusalem for the feast of Passover,
many began to believe in his name
when they saw the signs he was doing.
But Jesus would not trust himself to them because he knew them all,
and did not need anyone to testify about human nature.
He himself understood it well.

The Mass intention is for Bridget Doyle RIP.

When I was a kid, I watched “Jesus of Nazareth”, a British-Italian television drama in the late 70s. One of the surprising scenes was when Jesus went to the Temple and drove away the money changers as well as those selling animals. In this scene, which is based in today’s Gospel, Jesus was angry. Bishop Robert Barron cautions us when he said, “We must never interpret the wrath of God as an emotional outburst, but rather as the divine passion to set things right.” As God’s Son, He saw that His Father’s house has been turned into a marketplace. Strangely, the Jews were not happy with Jesus’ behaviour. Having money changers and animals in the Temple has been the norm, until this itinerant preacher from a remote place suddenly appeared and caused trouble. The Jewish leaders during Jesus’ time were so used to it that changing it is non-negotiable. Some commentators were of the view that such practice exploited the poor.

St Paul once wrote that our bodies are temples of the Holy Spirit (1 Corinthians 6:19). Like the Temple of Jerusalem, there are aspects in our lives that we think we are so comfortable with and no change would be necessary. Let this Lenten Season be a time to recall those aspects. Let the angry Jesus turn those bad habits and wrong beliefs upside down and disinfect our hearts from pride, anger, lust, envy, gluttony, avarice, and sloth. It may be uncomfortable; it may even be embarrassing; or even compel us to make some hard decisions. No matter what, let us accept Jesus’ positive anger to reconcile us with the Father!

Lord Jesus, thank You for Your Word today. Forgive us for the many times we have angered You. Make us humble to receive Your purifying love. Amen.

Suggested Lenten penance: Volunteer in a community activity or campaign for peace and justice. 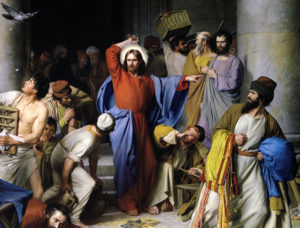