As soon as morning came,
the chief priests with the elders and the scribes,
that is, the whole Sanhedrin held a council.
They bound Jesus, led him away, and handed him over to Pilate.
Pilate questioned him,
“Are you the king of the Jews?”
He said to him in reply, “You say so.”
The chief priests accused him of many things.
Again Pilate questioned him,
“Have you no answer?
See how many things they accuse you of.”
Jesus gave him no further answer, so that Pilate was amazed.

Now on the occasion of the feast he used to release to them
one prisoner whom they requested.
A man called Barabbas was then in prison
along with the rebels who had committed murder in a rebellion.
The crowd came forward and began to ask him
to do for them as he was accustomed.
Pilate answered,
“Do you want me to release to you the king of the Jews?”
For he knew that it was out of envy
that the chief priests had handed him over.
But the chief priests stirred up the crowd
to have him release Barabbas for them instead.
Pilate again said to them in reply,
“Then what do you want me to do
with the man you call the king of the Jews?”
They shouted again, “Crucify him.”
Pilate said to them, “Why?  What evil has he done?”
They only shouted the louder, “Crucify him.”
So Pilate, wishing to satisfy the crowd,
released Barabbas to them and, after he had Jesus scourged,
handed him over to be crucified.

The soldiers led him away inside the palace,
that is, the praetorium, and assembled the whole cohort.
They clothed him in purple and,
weaving a crown of thorns, placed it on him.
They began to salute him with, “Hail, King of the Jews!”
and kept striking his head with a reed and spitting upon him.
They knelt before him in homage.
And when they had mocked him,
they stripped him of the purple cloak,
dressed him in his own clothes,
and led him out to crucify him.

They pressed into service a passer-by, Simon,
a Cyrenian, who was coming in from the country,
the father of Alexander and Rufus,
to carry his cross.

They brought him to the place of Golgotha
—which is translated Place of the Skull —
They gave him wine drugged with myrrh,
but he did not take it.
Then they crucified him and divided his garments
by casting lots for them to see what each should take.
It was nine o’clock in the morning when they crucified him.
The inscription of the charge against him read,
“The King of the Jews.”
With him they crucified two revolutionaries,
one on his right and one on his left.
Those passing by reviled him,
shaking their heads and saying,
“Aha!  You who would destroy the temple
and rebuild it in three days,
save yourself by coming down from the cross.”
Likewise the chief priests, with the scribes,
mocked him among themselves and said,
“He saved others; he cannot save himself.
Let the Christ, the King of Israel,
come down now from the cross
that we may see and believe.”
Those who were crucified with him also kept abusing him.

At noon darkness came over the whole land
until three in the afternoon.
And at three o’clock Jesus cried out in a loud voice,
“Eloi, Eloi, lema sabachthani?”
which is translated,
“My God, my God, why have you forsaken me?”
Some of the bystanders who heard it said,
“Look, he is calling Elijah.”
One of them ran, soaked a sponge with wine, put it on a reed
and gave it to him to drink saying,
“Wait, let us see if Elijah comes to take him down.”
Jesus gave a loud cry and breathed his last.

Here all kneel and pause for a short time.

The veil of the sanctuary was torn in two from top to bottom.
When the centurion who stood facing him
saw how he breathed his last he said,
“Truly this man was the Son of God!”

Vincent used to be an active member in his community. His outgoing attitude made an impression among his colleagues. For a few years, he was quite involved in almost all activities of the group. All these came to an end when he decided to leave. When friends asked, he told them “I have lost passion.”

In the Gospel for the Blessing of Palms (Mark 11:1-10), we read how the people “spread their cloaks on the road, and others spread leafy branches” while crying “Hosanna” to Jesus.  The people hailed the Lord as their King. But in the Gospel we just read, this same crowd wanted Jesus crucified. The people have lost their passion for Jesus. Whilst hanging on the cross, some of the crowd taunted Him: “Aha!  You who would destroy the temple and rebuild it in three days, save yourself by coming down from the cross.” Did Jesus give in to them? No! Because, despite the ever-changing passions of the world, Jesus remained unperturbed. Jesus’ passion for us all was, is, and will always be strong, faithful, and forever.

Lord Jesus, thank You for Your Word today. Transform us to be passionate in spreading the Good News of salvation so that more people would come to know You as the Son of God. Amen. 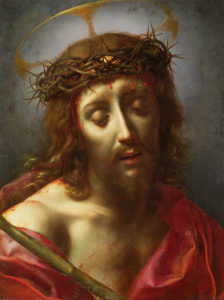