Early on the first day of the week, while it was still dark, Mary Magdalene came to the tomb and saw that the stone had been removed from the tomb. So she ran and went to Simon Peter and the other disciple, the one whom Jesus loved, and said to them, “They have taken the Lord out of the tomb, and we do not know where they have laid him.”

Then Simon Peter came, following him, and went into the tomb. He saw the linen wrappings lying there, and the cloth that had been on Jesus’ head, not lying with the linen wrappings but rolled up in a place by itself. Then the other disciple, who reached the tomb first, also went in, and he saw and believed; for as yet they did not understand the scripture, that he must rise from the dead.

The Mass intention’s are for

People of the Parish, Holy Cross

My dear friends as we listen to the Easter Sunday Gospel, we might well wonder how Mary Magdalen and the others who went to the Tomb had forgotten what Jesus had said about being put to death and rising from the dead. The great gifts of Easter are hope and faith. Hope: which makes us have that confidence in God, in his ultimate triumph, and in his goodness and love, which nothing can shake. Faith: the belief that Christ has triumphed over evil despite appearances and that the Resurrection is the definitive act in human history. So, we celebrate the mystery of the Resurrection, proclaim our faith and hope, and give thanks for these gifts.

As described by Benedict XVI, the resurrection was like an explosion of light, a cosmic event linking heaven and earth. But above all, it was an explosion of love. It ushered in a new dimension of  being, through which a new world emerges. It is a leap in the history of evolution and of life in general towards a new future life, towards a new world which, starting from Christ, already continuously permeates this world of ours, transforms it and draws it to itself. The resurrection unites us with God and others. If we live in this way, we will transform the world.

LIVE YOUR LIFE IN THE HOPE AND JOY OF JESUS TRIUMPHANT RESURRECTION! 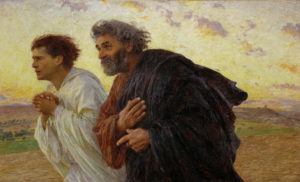