Gospel thought for Tuesday 6th April in the Octave of Easter

But Mary stood weeping outside the tomb. As she wept, she bent over to look into the tomb; and she saw two angels in white, sitting where the body of Jesus had been lying, one at the head and the other at the feet. They said to her, “Woman, why are you weeping?”

She said to them, “They have taken away my Lord, and I do not know where they have laid him.” When she had said this, she turned around and saw Jesus standing there, but she did not know that it was Jesus. Jesus said to her, “Woman, why are you weeping? Whom are you looking for?” Supposing him to be the gardener, she said to him, “Sir, if you have carried him away, tell me where you have laid him, and I will take him away.”

Jesus said to her, “Mary!” She turned and said to him in Hebrew, “Rabbouni!” (which means Teacher). Jesus said to her, “Do not hold on to me, because I have not yet ascended to the Father. But go to my brothers and say to them, ‘I am ascending to my Father and your Father, to my God and your God.'” Mary Magdalene went and announced to the disciples, “I have seen the Lord”; and she told them that he had said these things to her.

The Mass intention is for Eric and Marjorie Gilman RIP.

In Pope Francis, encyclical Laudato Si we can begin to look at our beautiful and ravaged world in a new way. The little phrase, ‘supposing him to be the gardener’ has depths of meaning, and we can understand Jesus as the Great Gardener who tends his creation carefully and begs us to respect it as we enjoy it.

Let me learn to spend a little time each day sitting with Jesus in his role as gardener. I thank him for the beauty of Earth, and I let him tell me how

he feels about its desecration. I may find myself weeping with him, as he wept over the dead Lazarus or the city of Jerusalem. I ask him for new eyes and for a new heart full of reverence for everything that exists.

By becoming a friend of the earth as he is, l will deepen the friendship between us. We share together in the task of protecting the environment. 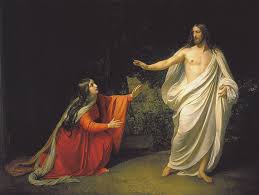