Gospel thought for Saturday 10th April in the Octave of Easter

Now after Jesus rose, early on the first day of the week, he appeared first to Mary Magdalene, from whom he had cast out seven demons. She went out and told those who had been with him, while they were mourning and weeping.

But when they heard that he was alive and had been seen by her, they would not believe it. After this he appeared in another form to two of them, as they were walking into the country. And they went back and told the rest, but they did not believe them. Later he appeared to the eleven themselves as they were sitting at the table; and he upbraided them for their lack of faith and stubbornness, because they had not believed those who saw him after he had risen.

And he said to them, “Go into all the world and proclaim the good news to the whole creation”.

The Mass intention is for Sisters of Nazareth,

These last verses are an addition to Mark’s gospel, written in a different style, and summarising the conviction of the early church as to who they were, who we are: witnesses to the resurrection of Jesus, carriers of good news, undeterred by the fact that our listeners, like those first disciples, are not easily convinced.

The risen Lord shares the energy of heaven and earth, of the whole of creation, which was created thorough him, with his apostles so that they will go from small places to the whole world with the gospel of the Lord strong in their heart. Our sharing in the life of the risen Christ is the same call to be ministers of the risen Lord in all of our lives. 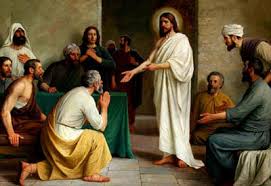