When Jesus looked up he saw some wealthy people
putting their offerings into the treasury
and he noticed a poor widow putting in two small coins.
He said, “I tell you truly,
this poor widow put in more than all the rest;
for those others have all made offerings from their surplus wealth,
but she, from her poverty, has offered her whole livelihood.”

“[B]ut she, from her poverty, has offered her whole livelihood.”

St Cecilia, a Roman virgin who came from an extremely rich family, was given in marriage to Valerian. She wore sackcloth, fasted, and asked the angels and saints to watch over her virginity. According to a 5th century tradition, she sang to God “in her heart” at her wedding feast. She told her husband that she has taken a vow of virginity and convinced him to be baptized. Valerian’s brother Tibertius was also baptized and together, they buried the Christians who were murdered by Turcius Almachius, Prefect of Rome. Both brothers were martyred. Being widowed, Cecilia spent the rest of her time preaching and converting over four hundred people to the Christian faith. She was later arrested and condemned to be suffocated in the Roman baths. Miraculously, she survived. The executioner tried to behead her, but to no avail. Left bleeding for three days, she preached or prayed to the crowds who came to see her. Cecilia and the poor widow in today’s Gospel have something in common: both offered their whole selves to God, fully aware that He will provide “from His glorious riches, which have been given to us in Christ Jesus” (Philippians 4:19).

Lord Jesus, thank You for Your Word today. Through the prayers and example of St Cecilia, grant us, especially all musicians, the grace to use the gift You entrusted us “in the obedience of faith, with a view of His glory, with an aim at His truth, in dutiful submission to His will, for the comfort of His elect, for the edification of Holy Jerusalem, His Church.” (St John Henry Newman) Amen. 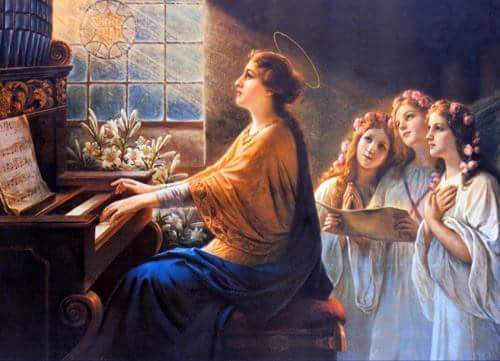