Jesus said to his Apostles:
“Do not be afraid of those who kill the body
but cannot kill the soul;
rather, be afraid of the one who can destroy
both soul and body in Gehenna.
Are not two sparrows sold for a small coin?
Yet not one of them falls to the ground without your Father’s knowledge.
Even all the hairs of your head are counted.
So do not be afraid; you are worth more than many sparrows.
Everyone who acknowledges me before others
I will acknowledge before my heavenly Father.
But whoever denies me before others,
I will deny before my heavenly Father.”

“Everyone who acknowledges me before others I will acknowledge before my heavenly Father.”

“In art, Catherine of Alexandria bears a spiked wheel and the martyr’s palm. She is said to have been a 4th century woman of great learning who confounded the emperor’s pagan scholars with her defence of Christianity. After Catherine’s arguments converted some of her interlocutors and the emperor’s own wife, Catherine was threatened with the torment of the wheel. An angel intervened, destroying the wheel, and Catherine was beheaded. One of the beloved saints of the Middle Ages, Catherine’s diverse patronage includes millers, young women, and philosophers.” A disciple’s encounter with Jesus can be life changing. We have read how the fishermen Peter, Andrew, James, and John became fishers of people. Or how Saul, a hardline Jew, became a passionate preacher of the Gospel. Now, we have Catherine, a princess who searched and fought for Christ and His heavenly kingdom. All of them acknowledged Jesus before others, even if it cost them their very lives. We celebrate such courage in the belief that the Lord, whom they have trusted wholeheartedly, has now acknowledged them in the presence of His Father. Such reward await us!

Lord Jesus, thank You for Your Word today. Through the prayers and example of St Catherine of Alexandria, make us realise how precious we are in Your sight that we may truly acknowledge You as the Lord of lords and King of kings. Amen. 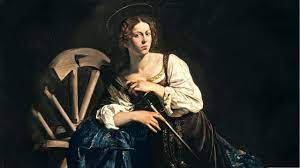